The first episode brought our host Nara Wilson together with Irrunytju locals Emily Gorey and Hinerangi Tukere, who is also the local HACC worker. These two women were able to help ground the show in the realm of the Ngaanyatjarra Lands and tailor it specifically to the locals.

Our production team consisted of film trainers Michael Mouritz and Elise Anderson, and production workers Cynthia Burke, Noelene Peterman and Roma Butler. We filmed in the Irrunytju Store and around the community, as well as filming the major cooking segment in our very own studio at NG Media. On the menu was Bush Chow Mein, also known as Piggy Piggy for its inclusion of pork.

The episode played on the strengths and knowledge of our mystery chef Hinerangi, who through her extensive work making food for the locals was able to bounce ideas off host Nara and pass them on to Emily, who handled most of the cooking duties. 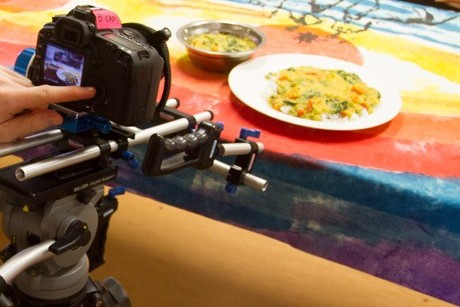